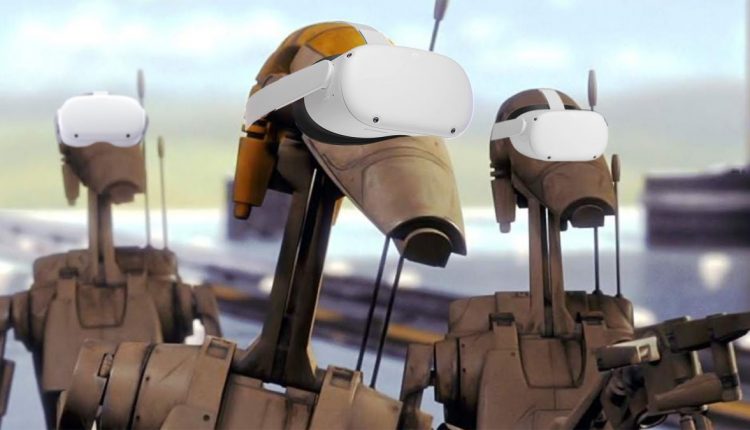 If you’ve been eagerly awaiting the chance to live through the Clone Wars for some strange reason — whether it’s living out a childhood dream or just wondering what it feels like to be in the head of a B1-series battle droid — the wait is over. All you’ll need is a Quest 2 and a copy of the game Contractors since this isn’t an official release of Battlefront.

Once you’ve loaded Contractors up on your Oculus Quest 2 (opens in new tab), head on over to multiplayer, browse the server list, and find any game with the loadout labeled “PeeJohnTest”. It might also show up as “Clone Wars” once the name change eventually goes through. The strange testing name is what the developer called it on the official page (opens in new tab) for the loadout, so don’t be alarmed if it seems a little weird.

The Clone Wars loadout for Contractors VR completely transforms both the character models on each side and the weapons you’ll be using. One side plays as Clone Troopers while the other side plays as B1-series battle droids, probably better known as “Rogers” from the movies and shows.

Contractors is one of our favorite Quest 2 games (opens in new tab) and can be described as a military shooter that’s in a similar vein of Call of Duty or Counter-Strike. The game recently received an update that included lots of tools for developers to make and import their own character models, weapons, maps, and design their own gameplay modes.

LOOK AT THIS OMG I’M A FREAKIN ROGER!!! pic.twitter.com/lphPYV0cJsSeptember 12, 2022

This Clone Wars loadout can be played with any map or mode in Contractors and comes hot on the heels of the immediately popular Halo VR loadout (opens in new tab) that launched for the game last week. As you might expect, the maps that feel the most authentic are ones that take place in iconic Star Wars battle locations like Hoth, Tatooine, Kashyyyk, and several others. We’ve already seen additional weapons added to the Clone Wars loadout since the launch over the weekend, and more weapons and maps are likely to come.

Playing any of these modes is simple and doesn’t require any kind of third-party modding. Contractors has an in-game “mod” browser where you can find and download any maps, loadouts, or modes that have been uploaded to the game’s servers. Anyone can use these “mods” to host their own servers or just join a server that already has them enabled.