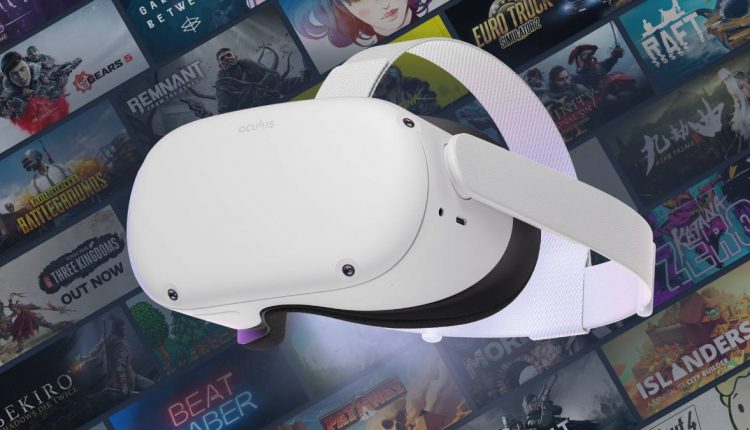 While there is an incredible library of Meta Quest 2 games to play, they aren’t the only VR titles out there.

Before the Meta Quest 2 (formerly Oculus Quest 2) showed us the potential of standalone VR gaming, there was a whole suite of experiences available on PC. This includes some of the best VR games – like Half-Life Alyx – that are exclusively available on the Oculus PC app or Steam VR.

Thankfully, even though Valve makes its own Valve Index headset, its Steam VR games are also playable on Meta headsets. So here’s our guide on how to play Steam VR games with a Quest 2.

The Meta Quest 2 Link cable – it can be used to connect your Quest 2 to a PC (Image credit: Meta)

This will (unsurprisingly) let you see your desktop, And from here you can open up Steam and then Steam VR so that you play any VR game you own and download others.

If you want to take things a step further, there is a community-made, open-source tool that strips back the Oculus App’s functions and turns your Quest 2 into “an almost-native Steam VR headset.”

Be warned though, that the app (called OculusKiller) is a bit too good at its job. It completely disables Oculus Dash which severely limits your ability to launch and exit Oculus games. If you like to play a range of PC VR titles across Oculus and Steam, then you’ll want to steer clear of this tool.

From here hit the down arrow next to More details and go to the Services tab. Sort by name and scroll until you find OVR Service; then right-click on it and hit Stop.

The folder you’re taken to is the home of key files that allow the Oculus PC app to operate properly, but we’re going to need to change some around.

Whether you choose to use OculusKiller or not, Steam VR is home to some truly incredible VR experiences.

Half-Life: Alyx is one that we won’t stop talking about any time soon. While not quite as immersive on a Quest 2 compared with the Valve Index, this follow-up to the hugely popular Half-Life franchise is still one of the best VR games. It offers both head-scratching scientific puzzles fans are used to as well as plenty of zombie-infested death pits that will test your mettle.

Are you ready to play Half-Life: Alyx? (Image credit: Valve)

Then there’s No Man’s Sky. The action-adventure survival game offers players the chance to explore an incredible endless galaxy, and playing it in VR in first-person is almost magical. While there are plenty of official Star Wars games out there too, this is one that really makes you feel like you’re off adventuring in a galaxy far far away.

Immersion be damned, I’m by no means utilizing this Oculus Quest 2 mouth haptic

The 10 Coolest Video games To Play on Oculus Quest 2