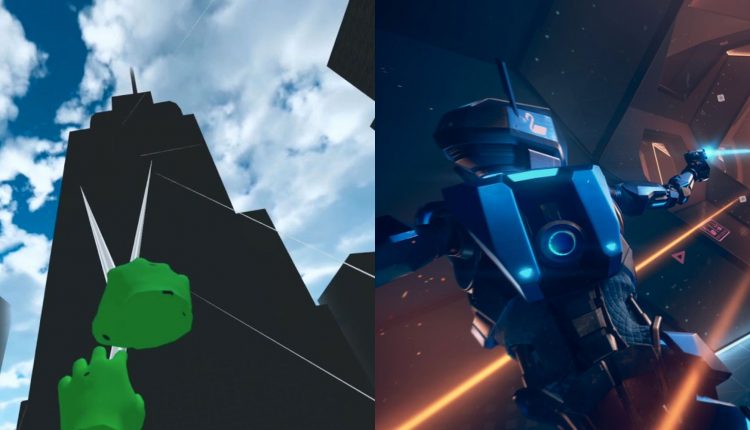 There is a lot of fun to be had in the VR world, but between the cost of the hardware and the individual costs of each game, it can be a pricey hobby to start up. Gamers can always wait to see what the daily deal is for discounted apps, but there are also plenty of games that can be downloaded and played for free.

RELATED: 20 Awesome Things You Didn’t Know You Could Do With Your Oculus Quest VR Headset

While some of these free games can be easily found in the app store, others are hidden unless searched for by name. Check out the App Lab section of SideQuest to see a variety of games that are free because they’re still in development. While some are not the best quality, others are long-time favorites that are worth downloading.

SCREEN VIDEO OF THE DAY

This game might be called Silkworm, but it might as well be called Spider-Man because that’s what players will feel like. Players are loaded into a cityscape where they have the opportunity to run, jump, and climb on anything they want.

But the best part is the ability to create silk webs that can be used to slingshot characters in different directions, zipline their way around the city, and make interesting designs. There are some fantastic paid grapple games on the Oculus, but this is a good option to see if that kind of thing is something you would enjoy or something that will just cause motion sickness.

Shooter games are a must for frequent gamers, and the best free option available is Gun Raiders. In this game, players can try out a variety of different shooter game modes, perfecting their skills with different weapons and making new friends during their assaults. It’s a great place for new players to start their Oculus journey.

While their community is relatively chaotic, as most public VR communities are, this is a great option for someone who wants to try out everything the Oculus has to offer without paying $10-30 per game. The variety of game modes and movement mechanics is unique among shooter games, meaning that while it might be the cheap option, that in no way makes it a bad one.

For those looking for a less physical but still incredibly fun game, look no further than Gods of Gravity. This strategy game tasks players with defending their home planets and taking over the planets and stars around them, using the various god powers they learn along the way.

RELATED: 10 Best Games That Mess With A Player’s Perception

The game can be done as single or multiplayer and is one of the very few strategy games that successfully translates into the VR realm without seeming like a pointless adaptation. The ability to teleport around from planet to planet makes it immersive and puts pressure on the player to strategize well but quickly, as the virtual reality element heightens its urgency.

Those looking in the app store for free games will quickly find two free poker games: Pokerstars VR and Poker VR. While both get the job done and are worth downloading, Pokerstars VR is generally seen as the favorite. There’s a great community in Pokerstars VR, which allows new players to quickly start interacting with their virtual peers in one of the best multiplayer VR games out there.

A tried and true classic of the gaming world is the dungeon crawler, and VR is no exception. While there are a few dungeon crawling games within some of the VR open worlds like VR Chat and the Rec Room, Ancient Dungeon is one of the best ones out there.

Reviewers compare the graphic style and quality to Minecraft Dungeons and generally rave about how great the set-up is. The full game is available for $19.99, but the randomly generated dungeons mean that the Beta version is easily replayable, making it something that Oculus users should jump on while they can still try it out for free.

Sports games are extremely common in the Oculus Store, but they can be pricey to play. Currently, one of the only free sports games is Echo VR, but the good thing is that it’s also one of the best. Think Ender’s Game meets ultimate frisbee, where players navigate zero-gravity rooms to try to score goals.

There are options to play with AI or other live players, so there’s always a way to practice your skills and create Echo VR teams. This game really takes advantage of the VR environment to bring sports to the next level, where players don’t have to be limited by their bodies or even by gravity. Because it’s so well suited to the VR environment, it’s one of the most immersive VR games out there.

We Are One Beta (App Lab)

This is not your everyday strategy game. We Are One involves detailed planning, precise shooting, and the ability to keep an eye on the clock. Players are able to create clones of themselves that they must interact with in order to beat each level. They have to be able to collaborate with a future version of themselves and pray that past-them did the right thing.

While it can take a little while to get the hang of, this is definitely the kind of game that could make its players loose track of time in the real world while they plan elaborate schemes where to do something right, they must rely on themselves.

Liminal is one of the newest additions to the Oculus store, fresh from the App Lab. Using psychological research, this app allows users to try out different games and experiences meant to make them feel calm, energized, or in awe. There are a few experiences in each category available for free each week, and players can use coins to favorite the ones they want to keep around.

RELATED: 10 Major Differences Between The Oculus Quest 2 & The Original

Coins, you say? Does that require in-app purchases? No. The app includes a section called The Lab where players can participate in studies on how effective various parts of the app are. That way, the creators can make more effective experiences, and the players get coins to save their favorites. All in all, it’s a win-win and a very effective way to use VR to influence your mood.

One of the best uses for VR is combat practice, where players can experience battle against endless armies with a variety of different weapons. There are many paid apps to practice these skills on, but one of the only free ones out there is Battle Talent.

It is a fun combat game for those who want to hack and slash, but it also has a little bit of magic. Players can throw their weapons away from them and then summon them back, making for some interesting ranged attacks. Even without factoring in price, it’s one of the best combat skill apps out there.

This is not your standard VR game. Moon Rider was created as a proof of concept for in-browser VR games, and it is incredibly successful. To access it, just open any browser in VR, enter the website URL (https://moonrider.xyz/) and click on the VR headset to become immersed in the game.

Moon Rider is very similar to the successful paid app Beat Saber but includes a variety of different play versions and song maps that are not available in the app. This is not just a pirated version either; it has permission from Beat Saber to do everything it’s doing and is a great option for those doing VR on a budget.

NEXT: 10 Video Games That Are Supposedly Cursed

Can You Play Phasmophobia on Oculus Quest 2?