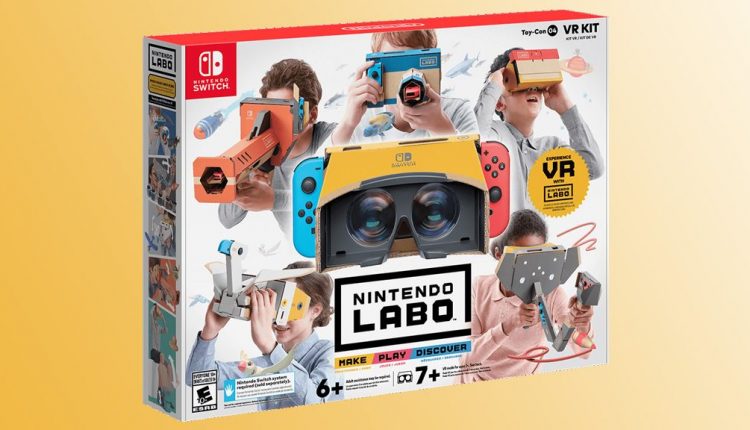 Nintendo Labo was an odd addition to the Nintendo Switch: the selection of cardboard peripherals that you assembled yourself over several hours went against traditional plug-in-and-play wisdom and was an argument for parents who prefer something interactive want to do with their kids when they park in front of the television.

You can read our in-depth thoughts on the original kit in our Labo review. Here we test the latest expansion package: the Nintendo Labo VR Kit.

The VR Kit is aimed at children from 7 years of age and transforms the Nintendo Switch into a real virtual reality console. It is a successful combination of learning, handicrafts and games that combines physical and digital games. But how does Nintendo put cardboard and VR together and why does it work so well?

The VR kit allows you (or probably your kids) to try out a number of simple VR games and demos with the goggles fitting in a box. Elephant, wind pedal, bird, camera or blaster, each of which must be made separately to unlock different types of games.

There are several cardboard sheets for each accessory that you can pull out the necessary components from before folding and assembling them. The crafting process takes anywhere from 30 minutes to three hours, depending on how skillful you are. However, we recommend planning the upper end of these estimates, especially for children (see box on the right).

There are also a variety of stickers, pieces of foam, and even elastic bands to make up some of the more intricate accessories. The Labo parts are both flexible enough for crafting and stiff enough to work like it should, and it’s amazing to put it all together without the box falling apart in your hands. After a couple of hours of poking tabs in gaps and following the jazzy directions from the counter, we had a cardboard elephant in hand, with elastic bands that kept the trunk upright and flexible, and we felt pretty proud of ourselves.

It helps that the instructions are so thorough. The Switch walks you through every step with a video that you can easily pause, fast forward, and rewind. This means you don’t have to keep up with what’s going on while you can zoom in and rotate the Labo model on the screen in 360 degrees. It’s ingeniously easy to see what needs to go where without having to deal with 2D paper instructions for a fully 3D process.

However, there are no backup parts. So if you tear up cardboard or lose IR stickers, you may have to cannibalize bits and pieces of other accessories in the package. At least the rubber bands shouldn’t be difficult to replace if you lose some, although design specs work best for a given size.

There are three stages to enjoying Labo and you will find that you care more about one than the other. The first is Make, which deals with the actual manufacture; The second is “play,” where you actually use your creations. and the third is “Discover,” where you can learn more about how the Joy-Con controllers and cardboard peripherals work together.

In-game, the games themselves are extremely straightforward, bypassing the common issues VR has with motion sickness or travel in-game by generally sticking to a fixed camera angle and sitting at the same time – you’re painting 3D sculptures and jumping over colorful balls and smashed toy trucks without running around knocking on the furniture.

Each accessory, or “Toy-Con” as they are called, has a unique entrance and its own selection of VR games. The camera allows you to take snapshots of cuddly animals or marine life while the elephant’s trunk can be turned into a hose or brush. The bird and wind pedal can work alone or in pairs and makes a good reward for those who have the patience to assemble the entire set.

Every Toy-Con is brilliantly implemented, right down to the tiny details like clicking the box with the camera zoom or reloading the blaster when you pull the barrel in your direction.

However, some of the inputs seem to be more random than others. Why the elephant trunk would be best for a game of cascading marbles isn’t immediately clear – if you get your head stuck in VR, what does it matter if it’s an elephant trunk or a regular controller?

The VR glasses have most of the games available and, as mentioned earlier, are the starting point for the rest of the accessories. Nintendo probably could have designed all of the games to work with the standalone goggles, though it would have been a lot less fun – and the tedious manufacturing process for each Toy-Con is what makes the games themselves so enjoyable.

Discover feels like the most radical part of the kit just because it’s so outrageously educational. You will meet a number of friendly cartoon characters who will explain you how to use each Toy-Con controller, which button to press and which gestures to use, to the basics of depth perception and infrared sensors. It’s very low pressure learning, but couldn’t do much better as a dedicated introduction to basic science concepts.

In the guide to getting started using the Labo VR Camera, we were helpfully advised to hold the lens from the bottom, and it has already improved our real-world camera work (see below).

Again, the level editor for the garage mode from Labo returns, with which you can create your own levels in VR. This is probably the most complex part of the package and requires more thought than the other VR modes. For older kids, however, this may be the first step on their way to getting to work on a main Mario game in 2030. As a creation tool, The Garage tool will add potentially endless hours to your Labo experience (although with any Labo kit you can add the Have equivalent).

One of the most impressive things about the VR kit is its reluctance to do long gaming sessions. VR can be quite tiring, even for adults, and the Switch regularly suggests breaks both when doing crafting and between VR games. The first camera title you can try shows how to take snapshots of different fish underwater and then drag them out of the game after three photos so you don’t hang around there too long.

This is because the resolution of the switch is only 1280 x 720 pixels, which is then halved to 640 x 720 for each eye in VR mode. For comparison: the HTC Vive headset has a resolution of 1080 x 1200 per eye, while the Oculus Go needs 1280 x 1440 per eye even for the budget. Lower resolutions often cause headaches or motion sickness in VR, and the Switch only gets around this by sticking to very simple shapes and objects in its VR games.

This is the main reason the VR kit is not suitable for children under the age of six, and you should make sure that your kids don’t play in VR with breaks for too long. We also don’t recommend trying out the VR modes for Super Mario Odyssey or Legend of Zelda: Breath of the Wild while wearing the goggles (the games weren’t designed for VR and the experience is overwhelmingly bad).

The experience is also more insulating than with other Labo kits. After doing handicrafts, you spend all of your time in VR wearing protective goggles – which means that you don’t throw your arms around as often as in the Labo Robot Kit (giant robot!) Or share the social experience of driving and with your friends with the Labo Vehicle Kit flying around (race!).

If you want the best social experience possible with your Labo purchase, the VR kit is probably not for you – although the VR feature is truly unique in today’s toy market and Nintendo has done this fantastically in a fun and straightforward way, even with the underloaded hardware of the switch.

Other VR headsets to consider

If you’re looking for a VR experience that isn’t for kids, you’re probably better off with a dedicated VR headset than Nintendo’s cardboard bypass. Oculus recently released the Oculus Quest ($ 399 / £ 399, about AU $ 730), a standalone headset with no lagging cables or consoles, while the Oculus Rift S and HTC Vive have more high-fidelity VR experiences and a serious one PC performance offers gaming. All of this costs more than the Labo VR kit: Quest and Rift S start at $ 399 / £ 399 (about AU $ 730), while the Vive starts at $ 499 / £ 499 (about AU $ 615).

In its shape, the Labo VR Kit is the closest to the Google Cardboard, which costs just $ 15 / $ 15 (about AU $ 20), although Google Cardboard doesn’t offer much more than simple VR demos on a smartphone .

The VR kit isn’t as social or extensive as some other Labo kits, but the tedious manufacturing process here is the real joy, and Nintendo carefully reminds you not to spend too long in the headset. Labo is a toy that encourages healthy viewing habits and offers many hours of varied play. It’s a really unique proposition in the gaming market today – and this is especially true when it comes to VR expansion.

Train Your Thoughts- The Advantages of VR Health on the Mind

How VR is lastly turning into actual, from new {hardware} to thrilling digital…