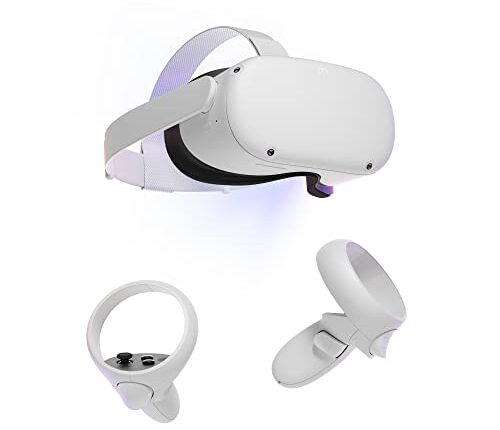 Sure, the Quest 2 was cheaper before August 2022 when its price was hiked $100 / £100 but this bundle packs in more than enough value to make this Meta’s best-ever VR deal.

(Not in the US or UK? Scroll down for the best Oculus Quest 2 deals in your region.)

Today’s best Black Friday Quest 2 deals in the US

The Oculus Quest 2 is one of the best VR headsets on the market, especially if you’re on a budget. While it’s not as impressive as the Valve Index in terms of specs, or normally as cheap as the Pico 4, Meta’s device has more than a few things going for it.

First, unlike the Index, Meta’s headset is standalone. If you want to connect it to a PC you can but to play a VR game you don’t have to. You also don’t need to set up any annoying towers in the real world either, you just have to clear a space and draw a quick outline once you put the headset on so it knows where is safe and you’re ready to go.

Secondly, while the Pico 4 is normally slightly cheaper at £379 (it’s only available in the UK) and comes with slightly better specs, its software is definitely inferior right now. Generally, the Pico OS doesn’t feel as fine-tuned as what Meta’s hardware runs on and the games on the Pico 4 aren’t as good as those on the Quest platform. Not only does it lack great titles like Beat Saber and Resident Evil 4 VR, but the Pico 4’s version of games like After the Fall and Walkabout Mini Golf lack content that’s available on the rival hardware.

That said, if you are in the UK you might still want to take a look at Pico’s Black Friday 2022 deal as you can get the headset and three free games – RuinsMagus, After the Fall, and Les Mills BodyCombat – for as little as £ 379.99. Just note that the deal won’t be live until November 24, and it ends on November 28, 2022 (like all the other Cyber ​​Monday deals).

Scroll down for more Black Friday deals in the US and UK.