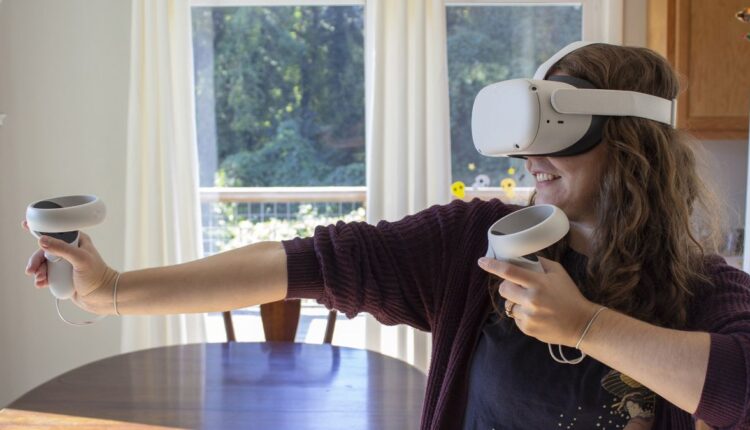 The appeal of working out with the Oculus Quest 2 is that your burned calories are almost accidental: enough Beat Saber swipes or slo-mo bullet-dodges in Pistol Whip, and you’ll eventually burn a healthy number of calories if you keep your heart rate up

With Meta adding a bunch of new Oculus Move tools to the Quest 2 and everyone trying to hit their New Year’s goals — and with the weather in California too awful for daily runs — I decided to test whether the VR headset can (or should) be something you specifically use to hit those goals.

Is the Quest 2 a casual side option while you keep your gym or running routine? Or can a Quest 2 fitness app like Supernatural — or even a regular VR game like Beat Saber — be enough for your everyday routine? Believe it or not, the answer is complicated!

You can pair the Quest 2 with a heart rate strap for more accurate results, but Meta should focus on fitness trackers next.

The built-in caloric tracker on the Oculus Quest 2 creates an estimated basal metabolic rate (BMR) based on your height, weight, sex, and age, then uses your tracked head and hand movements to calculate your effort. You can then sync your workout data to Apple Health or Android Health Connect.

Frankly, I’ve found my Oculus Move results aren’t the most accurate, especially for harder workouts, when it underreports my caloric burn compared to what various fitness trackers and watches have shown me. Meta just added the option to pair a Bluetooth heart rate monitor strap like the Polar H10 or Garmin HRM-Dual as of this January, but an HRM honestly isn’t the best option for immersion. Eventually, I chose to track cardio workouts on my running watch directly, bypassing the Quest 2.

Eventually, I’d like to see the Quest 2 get better integration with actual wearables. And we can hope that the Meta Quest 3, with its revamped full-color passthrough for mixed reality, will be a more comfortable workout option for people with limited space by giving hints of your walls and furniture in your virtual surroundings.

Hardware and data tracking aside, the more important question is whether or not Quest 2 games help you burn calories efficiently. Sure, some VR superusers will happily spend hours a day in their headset. But for those of us with limited time, we have to decide if playing “casual” VR games is enough, or if we have to use specific apps to make it worth our time.

The Oculus Quest 2 is a great fitness tool, but losing weight or improving your endurance is another conversation entirely.

Generally speaking, the CDC (opens in new tab) recommends you complete 30 minutes a day of moderate exercise (aka fast walking) or 15 minutes of vigorous aerobic exercise (swimming, fast jogging or cycling) five days a week. VR games do have moments of downtime — like choosing the next audio track or boxing opponent — but generally match a moderate intensity if you have time for 30–45 minutes of VR gaming a night.

So in that sense, using the Quest 2 for everyday fitness goals is a great idea! Not every Quest game will hit the level of activity you need, but there are a decent variety of great exercise and rhythm games to help keep things fresh and your BPM high, without it feeling like a real “workout” in many cases. The headset does get dirty with regular exercise, however, and there are ways to injure yourself without the right equipment, so we have some Quest 2 workout accessories we recommend.

If you’re hoping to lose weight or improve your endurance with the Oculus Quest 2, though, that’s another conversation entirely.

I’m not at all qualified to talk about dieting, but the general wisdom is that you need to burn 500 more calories than you consume every day to hit a 3,500-per-week threshold. Let’s assume that you break even on your body’s caloric burn vs. intake; how long does it take to burn 500 calories in VR? Or more, if you’re only working out 5 days a week?

A lighter person generally will burn fewer calories during the same activity but also doesn’t need to burn that many to maintain their health — and probably doesn’t need to lose that much weight anyway. As a 6’1 man, I’m on the higher end of the caloric scale, but even despite that, my calories burned per thirty minutes (kcal/30 hereafter) isn’t especially high with a lot of games.

Take those numbers above with a huge grain of salt, since (A) different games will burn more calories on higher difficulties, (B) every person’s results will vary, and (C) I frequently ran multiple games in one tracked workout, making it hard to separate my results. But you can see general trends here:

I’ve found that the Oculus Quest 2 is great for maintaining your body’s status quo in short bursts, or for burning calories steadily in a marathon 2-hour session. But as an actual fitness device for efficient results, you’ll need to stick to specific subscription apps like Supernatural or FitXR, which won’t be as fun. Even those will only just match up with running at a casual 12 min/mile pace for 30 minutes (about 300 kcal burned), once you take picking a workout and warmup/cooldown into account.

The Quest 2 delivers consistent, engaging activities that require some time to pay off fully, and is best used alongside other activities.

One trend I noticed was that I burned more calories in lower-intensity games after I completed a high-intensity workout. So after a run or an intense Supernatural boxing session, I’d burn more calories than I normally would in a game like Pistol Whip, without it feeling like a continuation of my “workout.”

Overall, the Quest 2 is a great fitness tool for people who just can’t stand working out and have plenty of time to hit a low, steady heart rate zone over the course of an hour or more. But it is a bit limited since, ultimately, it keeps you in one small square of your home instead of pushing you to move actively, and its limited tracking means that most VR workouts focus all their attention on arm movements and squats. Plus, you really need a replacement head strap that gives you a tighter fit for active games.

If you’ve struggled to build up any kind of fitness routine, the Oculus Quest 2 will help break down the barrier in your mind between working out and having fun doing it. But at a certain point, I’d say the VR headset is best used in coordination with other aerobic activities as a change of pace or cross-training, rather than as your main driver on the road to better health.

The Meta Quest 2 has a wide library of active VR games that’ll get your heart pumping. And from now through January 19, you can buy the headset and get a free Elite Strap headset, which makes it much more comfortable to use for exercise.