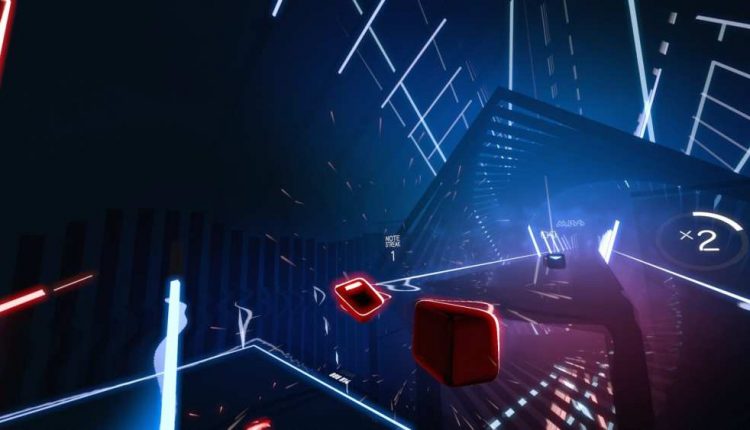 wondering what the best Oculus Quest or Meta Quest 2 games there are right now? The library of games available for Meta’s VR headset is growing each and every month, and while there’s some great experiences to be had on there like Superhot, The Climb and Population: One, there’s also a bunch that aren’t worth your time or money . Here, we’ll be running you through our top picks, including everything from a chill puzzle experience, right through to the head-bopping, neon-flashing glory of Beat Saber and everything in between.

I’m pretty sure it’s written somewhere that you can’t write a list of the best games for a VR headset without mentioning Beat Saber. That’s for a good reason, though, as the game is simply one of the best experiences not just in VR but gaming in general. This should easily be your first purchase on the Oculus Quest.

It’s an easy concept to jump into. Swing two lightsabers around to the beat of the music which can quickly amp up on the harder difficulties.

It is an enjoyable time trying to perfect each level, plus it can be a really good workout on the expert difficulty.

If you are a fan of puzzles, I expect you to Die is your ticket.

Evidenced by the name, the game takes some clear inspiration from James Bond with a satirical twist. You play as a secret agent put into various escape room-like scenarios in which interacting with your environment is the key.

Aside from its puzzle gameplay, I Expect You to Die is also very funny. It pokes fun at some of the most famous Bond tropes while still making you feel cool throughout the process.

If you’re still looking for some escapade-based puzzling fun once you’ve wrapped up the first game, you can dive straight into I Expect You to Die 2 offers up a whole bunch more fun scenarios to try and free yourself from before time runs out!

If you’re looking for a very trippy VR experience on your Oculus Quest, look no further than Thumper.

Thumper is a rhythm-based game following a beetle grinding on a rail that has to avoid various obstacles in sync with the music.

Like many games on this list, it is a simple gameplay concept that has a lot of depth as the levels go on. The surreal visuals help you forget your own reality and make you accept your true calling as a space beetle.

Out of all the games on this list, Real VR Fishing is by far the best-looking one on the Oculus Quest. Fishing has been done in many games, but doing it in VR across some stunning real-world backdrops takes it up a level.

It’s a nice one to chill out to and maybe listen to a podcast, which the game makes easy by including an in-game MP3 player and web browser.

A recent update to the game also made it so that fishing with friends in VR is now possible. There are some points subtracted though, since the name isn’t Reel VR Fishing.

Like Beat Saber, Superhot VR is another widely popular title that earns its spot on every VR list. Superhot pits you against enemies which you’ll defeat with your fists, guns, and any other nearby objects. The catch is that time only moves when you move, which adds in a bit of a strategic element.

Superhot VR benefits a lot from being wireless on Oculus Quest by being able to move freely without sacrificing many visuals on the weaker hardware. Punching a red crystal person and catching their gun in midair to shoot two others is simply as awesome as it sounds.

A 3D platformer may not initially seem like the first thing you’d want to play in VR, but games like Trover Saves the Universe make it clear that they’re extremely viable. While it doesn’t have the top-notch level design of PSVR’s Astro Bot Rescue Mission, it is still an enjoyable one that stands out thanks to Justin Roiland’s brand of comedy.

The game’s visuals are solid, though you will notice a texture or two that don’t look too hot up close. Trover Saves the Universe is still one I recommend picking up, particularly if you are a fan of Rick and Morty.

While chances are you’ve never wished that a zombie apocalypse broke out across the world, you may have always wondered how well you’d fare amidst an outbreak of the undead. The Walking Dead: Saints & Sinners allows you to put your survival skills to the test, with a lengthy campaign where you’ll have to use the crafting system to create your makeshift melee weapons and gears and hack and slash your way through hordes of the staggering flesh-eaters.

With a stamina system and weapon degradation, Saints and Sinners adds a sense of immersion to proceedings, and while these systems are sometimes deemed annoying by players in regular games, they just make that little bit more sense in a VR title. Even better, the game looks pretty fantastic and doesn’t require you to hook up your Quest 2 to your PC, meaning you can really get into the action without worrying about tripping over that cable (or yanking it out of your PC!).

For team-based multiplayer action, Echo VR can satisfy your need. The game involves two teams attempting to throw a disc into each other’s goals in a zero-gravity environment.

Playing with others in VR is a whole different experience than traditional gaming, with spatial sound and actually seeing their body move in natural ways, making it feel all the more real.

Just moving around in the game is fun but can be a bit disorienting at first because of the zero-gravity. If the Oculus Quest is your first VR headset, I definitely recommend keeping Echo VR for last until you get your VR legs under you. It is free though, so no worries about possibly wasting your money if it does make you sick.

The other trippy VR experience on this list, Tetris Effect, brings a whole new way to experience Tetris’s long-perfected gameplay. The visuals each stage brings truly immerse you into different worlds with an excellent soundtrack to go with them. All the stages take various influences from different parts of Earth’s cultures and geography, highlighting just how cool our planet is.

If you have a Bluetooth-capable controller, then I highly recommend pairing it to your Quest for this one. Playing Tetris on the Touch controllers’ analog sticks is simply not a great substitute for a real d-pad.

If you’re looking for another, slightly less violent option then The Climb and its sequel — aptly named The Climb 2 — are going to be worth you checking out. These are super-realistic free-climbing titles where you’ll need to carve out your own paths up sheer cliff-faces with mildly terrifying drops awaiting you below.

Each course has different paths for you to navigate, and you’ll even need to use correct gripping methods in order to actually scale them. Complete a course and you’ll level up and can buy some more cosmetic goodies from the in-game store. A wrong move will send you careering to a fate that can only be described as a gooey mess on the ground… and a retry option!

The Climb is truly fantastic, though, and is well worth checking out if you’re looking for something that shows off just how immersive your Quest 2 can be. In other words, it’s a perfect party piece to whack on when your nan’s next round at your house.

While Half-Life Alyx is exclusive to PC storefront Steam, by using a Link Cable, you can actually play the game on your Quest 2!

The game is also quite possibly the best full-fledged VR games, coming in at over 10 hours in length with fantastic visuals and ingenious use of VR-specific mechanics and incredibly realistic physics. It’s a true sci-fi shooter epic and one that also helps to flesh out the Half-Life story.

If you’re looking for the very best that VR has to offer, then Half-Life Alyx should be right at the top of your list.

Battle Royale games have been talk of the metaphorical video game town for quite some time now, so it should come as no surprise that they’ve breached the digital walls of virtual reality, too. Population: One is the game to lead the genre into this new realm, dropping you and two friends onto a map and tasking you with being the last players standing against a bunch of others.

Where Population: One really stands out from the crown, though, is the fact that every wall, ledge, and just about any surface can be climbed up, and the intuitive VR controls only helps to immerse you in the action that little bit more.

Not only that, developer BigBox VR has been doing a great job of providing constant in-game updates and events to keep things fresh for returning players. If you’re looking to take your Battle Royale antics to the next level, then this is definitely one worth checking out.

Ok now you’ve had your serene free-climbing game, back to the gory VR antics. Resident Evil 4 VR takes one of the series true high points and brings it to the Oculus/ Meta Quest 2 with all of the jump scares and panicky moments the series is known for, shoving them right into your face so there’s no escape.

Something to keep in mind is it’s not the prettiest VR game you’re going to play, but following the recent Mercenaries update, Resident Evil 4 VR has a perfect mode you can hop into for a quick 10-minute bout of zombie blasting action.

The Thrill of the Fight

Rounding out the list is a fun and really great workout experience. The Thrill of the Fight is a boxing sim that is as close to the real thing in games that you can probably get. Unlike other VR boxing games like Creed, Thrill of the Fight doesn’t enforce any stamina bar and fully relies on your actual abilities.

This is another game that takes advantage of the quest’s lack of wires and the ability to make a large play space (which is required in this game to move around the ring). If you are looking to break a sweat on the Oculus Quest, Thrill of the Fight should be your go-to.

Ever wanted to feel like you’re John Wick, popping off rounds and diving around some strobe-filled disco all eloquent and ninja-like? Well, Pistol Whip allows you to do exactly that… except while you feel like you’re a complete bad-ass, anyone watching you will see you wildly flailing around your living room like an utter lunatic. In other words, it’s a great spectator sport, too!

Pistol Whip is an epic blend of fast-paced shooting and beat-based gameplay, all wrapped up with an epic soundtrack and neon-soaked environments and bad guys. It’s genius is honestly just best experienced for yourself, but if you like Superhot and Beat Saber and you’re looking for something similar that combines the two… well, you’ve found it.

Wrapping up the list is not really a game but still a cool experience for Oculus Quest owners. Bigscreen Beta allows you to watch movies and TV in theaters with other people. You can rent films or check into their official lobbies to watch stuff for free (like a 007 channel which runs Bond movies 24/7).

Because of the Quest 2’s sharper screen, you really feel like you’re in the theater. One of the coolest experiences I’ve had with the Quest so far was watching SpongeBob with complete strangers. As a free app, Bigscreen Beta is an easy recommendation.

The Twilight Zone VR launches for Oculus Quest 2 this July