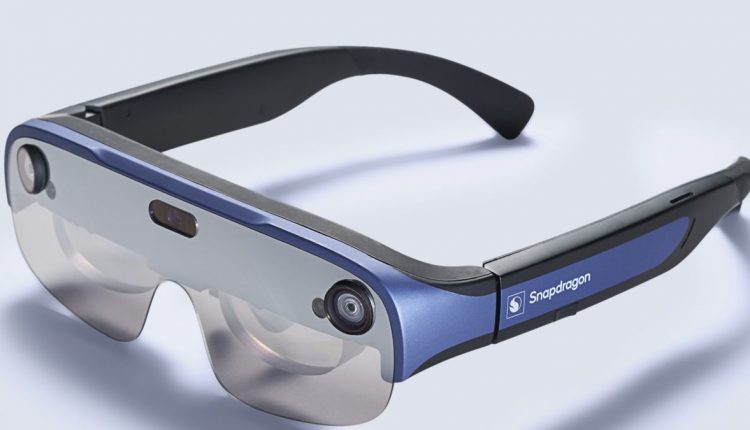 Since 2016, Qualcomm has created VR and AR “reference designs” showcasing the capabilities of their XR chips, which VR companies use as a blueprint to create their own hardware. Oculus, Google, Pico, HTC, and other brands have all taken inspiration from Qualcomm, as well as Snapdragon chips.

So when the chipmaker releases a new design along with new silicon, it gives us a solid prediction of what consumer tech will look like in the next couple of years.

We got one such future glimpse on Friday, as Qualcomm showed off its “Wireless AR Smart Viewer Reference Design” powered by the Snapdragon XR2 Gen 1 — the same chip inside of the Oculus Quest 2 and other standalone VR headsets.

Qualcomm previously released the Snapdragon XR1 Gen 1 specifically for augmented reality, but it’s a chip that relies on a tethered link to a smartphone. With the XR2, it’s tailor-made for wireless connectivity, so your AR glasses receive data over the 6GHz band with minimal latency and no wire hanging from your face.

In an earlier briefing, we learned more about the Qualcomm AR glasses’ specs. For visuals, it has dual 0.49-inch microOLED displays with 1920×1080 resolution and 90Hz refresh rate. 2 6DoF tracking cameras and one full-color camera are built into the lenses, giving it a somewhat hefty 115g/4oz weight. But it’s actually 40% thinner than Qualcomm’s tethered AR glasses design, making them more bearable to wear.

These glasses will work using split processing. The Snapdragon XR2 will send the users 6DoF positioning and hand/eye tracking to your smartphone or PC, while your device sends back compressed rendered frames to the glasses.

Qualcomm said the device would send data across Wi-Fi 6 and 6E networks, and could be upgradeable to Wi-Fi 7 once that standard is widely available. Having a Wi-Fi 6E router or good 5G reception could be a prerequisite for consistent, high-end AR in the future, although the device does also work over 5GHz.

The Qualcomm AR glasses will also support Bluetooth 5.3, if the developer decided to include controllers as part of the glasses package.

You’ll clearly need one of the best Android phones with the latest connectivity tools and a fast processor — possibly the Snapdragon 8+ Gen 1, which Qualcomm also announced today.

The company also introduced a tool called “Qualcomm FastConnectXR Software Suite,” which gives “preferential channel access and interference mitigation for XR traffic.” Essentially, it prioritizes data transfer to and from your glasses to keep latency to a minimum, which is critical for both immersion and preventing nausea.

Qualcomm’s prototype had one notable downside: the engineers admitted the reference device, which has a 650mAh battery, might only last about 30 minutes while using a demanding application. They did mention an attachable battery design that you’d connect via cable, but that adds a tether to the “wireless” AR glasses. Evidently, making AR glasses portable limits the ability to last very long.

In this case, we know that Meta plans to release new AR glasses in 2024. While its Nazare glasses will reportedly work independently, Meta will also release more affordable AR glasses codenamed Hypernova that pair with your smartphone. It’s highly possible that Meta, which has worked closely with Qualcomm before and has gone all-in on wireless devices, will base Hypernova in part on this reference device.

Whatever comes of the Wireless AR Smart Viewer Reference Design, it’s bound to lead to some major improvements in the smart glasses industry.