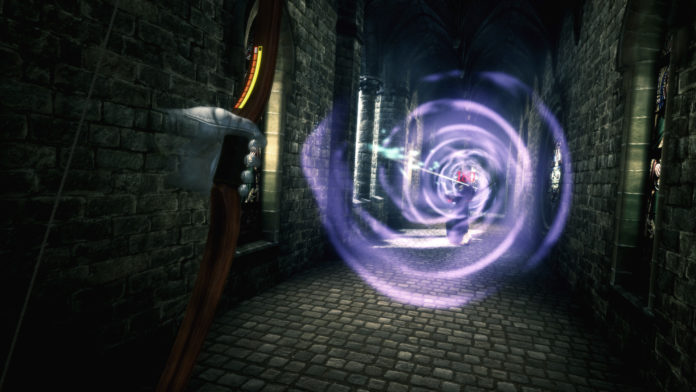 Archery is an intense action activity that uses the entire body, especially in VR. Most people don’t realize that the legs, core, back and upper body muscles are all working together to stabilize the body to take an accurate shot in room scale. Even if you’re flinging arrows around rapidly and aren’t standing still enough for headshot accuracy, you’re still using those main muscle groups to simulate the pullback of the bow and release of the arrow in VR. Archery in real life translates to VR! Credit to: Pexels

bowhunting says that upper body archery muscles of the “shoulders and upper back are the rhomboids, levator scapulae, trapezius, deltoids, latissimus dorsi, and the rotator cuff muscle group, which includes the supraspinatus, infraspinatus, and teres minor.” It’s important to note that as humans we tend to favor our dominant hand over our less dominant one. With this said, to get a symmetrical workout you’ll want to switch arms every so often during game time to divvy up the slow burn of lactic acid and an extreme case of noodle arms the next day.

If you want more of a workout and are aiming to break through weight loss plateaus wearing a weighted vest will give you added weight to kick calorie scorching into high gear. Archery is not only good for a heart-thumping workout and letting off some steam, it can help clear the mind, build up coordination that can make you a more accurate VR gamer or athlete, and can help you take life less seriously. Hey, we can’t all be Oliver Queen from Arrow or Katniss Everdeen from the Hunger Games but we can sure try!

Check out my favorite VR archery titles for exercise below!

This is a beautifully designed archery game that’s been compared to the style of Dark Souls. To move around In Death players can use their arrow, teleport, or throw a crystal to dash, and dodge attacks in room scale. Procedurally generated maps and long open corridors are perfect for flinging arrows at grotesque minion’s, sword-wielding Knights or hooded creepers that can randomly spawn to scare the “you know what” out of you. As an early access game it’s exciting to see that at Purgatory II and higher levels/chapters there’s a save point for taking rests, giving friends a chance to play, or for segmenting your workout sessions without having to start all over again.

If you’re looking for an archery game for VR that will keep your arms active as you and other players pluck swarming waves of enemies out of existence with powered up arrows, look no further. QuiVR is said to be one of the best archery games for virtual reality because of its rapid arrow shooting as well as super reactive and realistic boss and enemy attack behaviors. There are no sitting ducks for targets here, you’ll have to use your coordination skills to time arrow strikes, move around in room scale and make it past gates. Currently, QuiVR is in early access but is still highly playable with frequent updates and added bosses.

It’s an Elves versus Orks world in Elf Assassin where you’ll take on big burly Orks that are trying to hit you with an ax and dragons that are gonna light you up if you let them. Avoid an ax throw to the face or a fiery blast by ducking and then quickly rebounding with a barrage of piercing arrows at a distance or up close. Defend the town as a solo player or join a team of 4 to put an end to the invasion. If you feel like playing against other archers go for their multiplayer deathmatch mode. As it is now, Elven Assassin is an early access game but is totally playable with an increasingly difficult arcade mode, multiplayer PvP, new bad guys, and special ability progression.

much like a boomerang holo point is a game where you’ll be aiming and shooting arrows at blue targets, enemy samurais, and ninjas that will shoot right back at you. You’ll want to duck or dodge these to avoid taking damage and move around in room scale to avoid getting overtaken by bosses at the combat dojo. Waves will get progressively harder as you unlock them, so speed shooting is going to be your best option here. Holopoint is a fully released game and gets seasonal updates like their Winter Raid Event and additional items like carbon fiber bows that you can purchase for customization. Be fair warned that this game can get really intense and deliver a solid workout. You’ll be sweating in no time.

VR Isn’t a Novelty: Right here’s The right way to Combine it Into the Curriculum