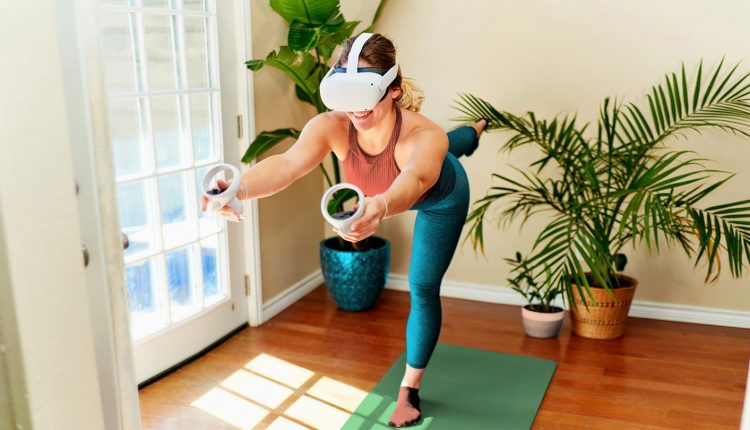 Slicing orbs to the beat of your favorite song, jumping over and ducking under laser beams, or sword fighting orcs in the middle of a forest — if these workouts sound like a lot more fun than clocking miles on the treadmill, read on.

With virtual reality (VR) technology, you can break a sweat and burn some serious calories from the comfort of your living room, says Jimmy Bagley, PhD, an associate professor of kinesiology and research director of the Strength and Conditioning Lab at San Francisco State University, where he studies virtual reality health and exercise. Plus, the games can be a whole lot of fun.

“Virtual reality games aren’t always marketed as exercise, but our research shows that when you play them, some can deliver the workout equivalent of walking on a treadmill or cycling on a stationary bike,” Dr. Bagley says.

To start with VR fitness, you’ll need a VR headset, like a Meta Quest 2 (formerly Oculus Quest 2), an HTC Vive Pro, or a PlayStation VR. Then you’ll need to download a few games.

And remember, if you have a health condition or injury that might interfere with your ability to safely exercise, check with your doctor before trying out VR fitness games or any new workout program.

We asked Bagley and other experts in the VR fitness field for their favorite games to play when they’re ready for a workout. These games will get you off the couch and on your feet, and they’ll even get your heart rate pumping. Here’s a roundup of their top picks:

It’s a subscription-based workout platform that currently offers more than 500 works and adds new ones daily. You can do yoga, Pilates, boxing, and more, led by a virtual instructor, and in a variety of stunning destinations from around the world, from the salt flats in Bolivia to a volcano in Iceland.

For a full-on workout, you can try Supernatural’s signature game, Flow, where players use their controllers to smash targets to the beat of a song, while ducking, lunging, and jumping to evade oncoming shapes.

The workouts are typically between 10 and 30 minutes. “The time goes by faster than you think, and before you know it, you’re sweaty and you’ve done your day’s worth of exercise,” Bagley says.

to play It’s for Meta Quest VR headsets only. Members pay $19.99 per month.

Bagley calls it “addictive.” With a controller acting as a lightsaber sword — one red and one blue — in each hand, you’ll slice oncoming shapes to the beat of the music. The shapes are either red or blue, and your job is to slice them with the corresponding sword. You’ll also need to duck and dodge oncoming obstacles.

“It reminds me of old school Dance Dance Revolution. It can end up being a pretty intense workout,” Bagley says.

to play Beat Saber is available on multiple platforms, including Meta Quest and PlayStation VR headsets. It retails for about $30.

3. Thrill of the Fight

If you’ve ever wondered how you’d fare in a boxing ring, download Thrill of the Fight and slip on your VR headset.

Stanton says researchers at the VR Health Institute measured how many calories players burned in a variety of games, including Thrill of the Fight. Turns out, this sparring game had one of the highest energy expenditures per minute of the games they looked at. Players burned between 9.74 to 15.32 calories per minute, which is on par with calories burned during a traditional, real-life rowing workout.

You’re throwing punches consistently, while squatting and ducking side to side for matches that are roughly five minutes long. The workout can be pretty strenuous. Stanton says you’ll end up covered in sweat and likely have sore arms after a few matches.

Bonus: You won’t feel any of the virtual punches and hits that come your way!

When Tim Donahey, an Ohio-based National Academy of Sports Medicine-certified personal trainer, turned to VR fitness in August 2016 to help him lose weight he had gained earlier in the year, Holoball was one of the four games in his daily rotation. (Donahey stuck to one hour of VR exercise five days a week for 50 days, chronicling the experience on Reddit.)

Holoball is like virtual racquetball, where players are in a colorful room hitting neon-colored balls at the walls in front of them. “It’s very intuitive, so you’ll feel familiarity right away playing the game. But from a cardiovascular standpoint, it’ll get your heart rate up to the warm-up zone and keep you there,” Donahey says.

to play Holoball is available on multiple platforms, including Meta Quest, PlayStation VR, HTC Vive, and Steam. It’s priced at $9.99 to $14.99 (depending on your platform).

If you want to try your hand at archery, look to Holopoint.

In it, you play an archer, drawing a virtual bow to hit blue targets that are coming toward you. Each time you eviscerate a target, it fires a blue laser beam at you that you’ll need to dodge, according to Mathias Sorensen, an ACSM-certified personal trainer and curriculum manager at the American Fitness and Nutrition Academy in Pasadena, California. Sorensen, an avid gamer, says he started using VR fitness games in 2015.

Sorensen says he likes the diversity of movements — you’ll be running around your living room shooting arrows from various stances, while leaping and ducking to avoid laser beams.

Here’s your warning: As the levels progress, you’ll encounter ninjas and samurais armed with swords and laser beams of their own, too, Sorensen says.

to play It’s available for Meta Quest, Steam, or PlayStation VR. It costs $14.99.

If you prefer a variety of options for working out, give FitXR a try, Sorensen says. You can choose from boxing sets, dance classes, and high-intensity interval training (HIIT) studios on the platform. You’ll sign up for a monthly subscription to access the workout database. There’s a library of on-demand classes, with new workouts released daily. You have the option to choose from different music genres and workout environments.

Sorensen’s favorite part of the platform is the boxing exercises.

“It’s one of the most demanding games you can play for cardio. You’re throwing punches, you’re dipping out of the way of oncoming hits, you’re pumped the entire time,” he says.

to play It’s only available for Meta Quest. A monthly subscription is $9.99.

Goalies deal with a lot of pressure on the soccer field. If you wanted to be in their shoes for a day without the real-life pressure, Donahey’s VR fitness pick is Goalkeeper VR.

You’ll need concentration, coordination, and the ability to react quickly as you protect the net from soccer balls heading your way, Donahey says. Expect to be jumping, lunging to either side, or sliding on your knees to deflect balls with your hands, feet, and even your forehead.

“It’s a game that will have you jumping the whole time,” he says.

to play It’s available on Meta Quest, HTC Vive, Steam, and PlayStation VR. Download it for $6.99.

The Oculus Quest 2 now prices extra, as a result of Meta