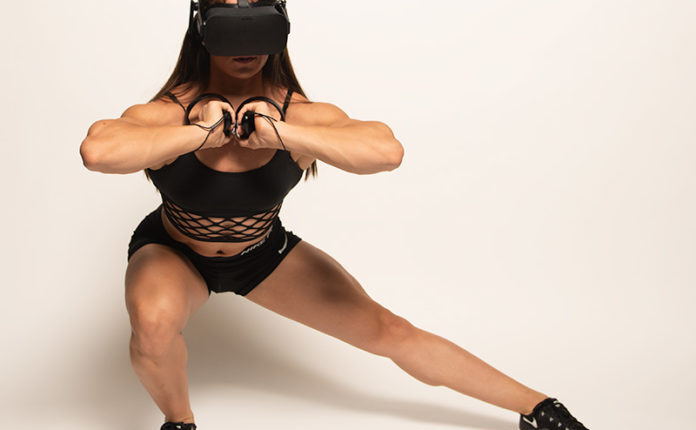 There are those with evergreen bank accounts and then there’s the rest of us who have to save and budget. The reality is, money is fluid but there are times where we can’t justify buying one trendy $30 or even $60 VR game (yep). Lots of love and labor went into creating it, it slays calories, can be modded for funsies, but it’s just too pricey!

Get an effective VR workout on a budget by buying fitness games that won’t break your piggy bank! I played 3 games, for more than 10 minutes a piece and for roughly a 43-minute workout. There was some downtime in between for setup, waiting screens, and all that jazz.

So, you’ll see my heart rate curve downwards during those parts and wider gaps where it took time for me to close down games and start the others.

This is a Free Oculus game where I was given 4 melee loadout options to destroy robots. They are: hold two blades, to wield two flying axes, to use one blade and one ax, or use one of either weapon. Add your own music to make slaying robots a unique workout.

Although I used smooth movement to glide around stages I still moved around a bit by stepping around robots with guns, missiles, and blades. Admittedly, I could have utilized my legs more for dodging 1:1 robot attacks, but my heart rate was still elevated from blade attacks.

This is a $9.99 purchase for Oculus, Vive, and WMR, which is a deal for this arm scorching karate chop and rhythm game. It’s just you, your hands, fists, and shurikens.

For this workout, I played Chapter 1 to 2 as a karate master threw cinder blocks and boards at me to music. This guy will fly around and throw things, and you need to follow him by turning around. I used my hands to chop, pushed a button to close fists and punched, and then threw shurikens with a button press. This game feels a lot like hitting a speed bag without any resistance.

It’s a $19.99 VR game to splurge on. Don’t fret, you saved some serious coin with the first two games I recommended. It’s one of the most popular games for VR and is a killer rhythm, music, and full body workout for Oculus, Vive, and WMR users. PSVR soonish.

New players will start playing the game’s original 11 song soundtrack and beatmaps. Or, you can head over to this beginner’s guide to Beat Saber modding article to really customize your map/music loadout. As you can see in the picture, my fat burn, cardio, and calorie burn all peaked playing this game. For this workout, I played 3 games again except this time I added two different games into the mix. I played them for over 10 minutes a segment and this lasted 39 minutes.

Keep in mind that I went over 30 minutes because of loading times, game entry, a water break, and because I added another chapter of Chop It to my workout.

Like I said above, I added Chapter 3 to my workout. This added around 3 minutes to gameplay time. As you can see in my workout data, this game really got my heart rate up and ignited fat burn and even cardio started to kick in towards the peak.

Honestly, chopping boards and punching cinder blocks made my arms really tired and really tested my coordination and rhythm keeping skills. There are over 10 chapters, so this game is worth more than $1 a chapter as far as fitness goes because you can replay it over time to beat your higher scores and work those arms.

This is a Free squatting game for Oculus and Vive headsets. Oh man, my thighs are on fire from deep squatting and holding it that I’ll have to really stretch and foam roll my legs out. My fitness data shows that this leg day game really made my heart rate climb steadily and sent me into fat burn for the majority of the workout.

This is a bargain and one-of-a-kind VR game that’s going to test your ability to squat your way through tunnels. Go up and down in a moderate pace and then make your legs shake by holding it through the cut-out tunnels. Don’t make the same mistakes I did and make sure to stand up in between tunnels. If you don’t it’s going to cost you your level and you’ll have to start over.

It’s my second splurge game that prices at $19.99 for Oculus, Vive, and WMR headsets. If you’re looking for a platform boxing game to get in shape, rev up your cardio, and work at melting off the extra poundage, this is your go-to game.

I played an 11-minute boxing session called “Hip Hop Hook” where I was jabbing, throwing hooks, uppercutting, and even doing side lunges and squats. After playing Hot Squat my legs were feeling burnt out, which I felt early on in the BOXVR session. The pain faded over time and I lunged and squatted and powered through the workout. The fitness data shows that I peaked my heart rate, and maintained a steady incline of fat burn and cardio. Well worth the $20 since there’s tons of content created by fitness experts.

VR is the Finest Train Gear You may Ever Personal